One of the most extreme bands in all of music has made its way to the Vogue Theatre  in Vancouver to support the GWAR tour.

Who is this you say?  NAPALM DEATH

There are not many Grindcore / Hardcore bands that survive over 30 years, but the masters of the genre, Napalm Death, continue to make one solid album one after another, with the lastest masterpiece ‘Throes of Joy in the Jaws of Defeatism’ released in 2020.

The band has be kept largely intact with Shane Embury (bass since 1987), Danny Herrera (Drums since 1991) and Barney Greenway (Vocals, since 1989).   One very notable miss since the last time I saw them is Mitch Harris on guitar who is on somewhat of a hiatus (personal, family reasons).   Taking over for Mitch is John Cooke at this time. 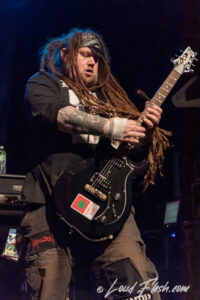 Tonight the boys start off with ‘Unchallenged Hate” as Barney gets in few brief screams and barks before getting into some pretty profound lyrics on racism.   If you think Napalm is some dumbed down death metal band, I suggest you check out the lyrical content to their songs (16 they played this night).  To me, they were always more of a Hardcore punk band than a ‘metal’ band.  Frankly, I would love to see the lyrics in a poetry book, as they are just so well done and thought provoking.

Barney looks like he has lost some weight and appears to have really slimmed down too since I last saw him!  This bloke is looking like he is 25 years old! He has not lost any step whatsoever.   From the first second onstage he always appears to be pulling 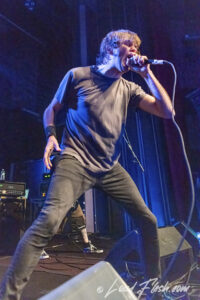 a demon out of his body.   Pacing back and forth and shaking his head like a madman before he belts out the lyrics.   Sometimes grasping his head and pulling his hair to get himself in the hate zone to sing these pissed off songs.  I love it, he sings it like he means it, and no pussy footing around.  Ever.

I personally got into Napalm in 1994 with the epic “Fear, Emptiness, Despair” album and incredibly happy to hear ‘Hung’, one of my all time favorite songs.  Also, playing the Dead Kennedy’s cover of “Nazi Punks Fuck off” near the end of the set was another barn burner this night too.  Barney gets into abit of a rant between songs on how terrible it is for women not to be able to make their own decisions on their bodies and abortion then rips into the classic ‘Suffer the Children”.   They end the night with some high speed guitar riffing from John with ‘Unfit Earth’, a song about how we are choking the planet with chemicals and “Disasters man made and natural”.  That sure hits home with me with all the obvious climate change that British Columbia has faced in 2021.

If you have any take away from Napalm Death, actually give the lyrics a read and you will be very enlightened to see that this group has a lot to offer above the shoulders as compared to a lot of metal I hear these days.  Highly recommend you pick up the new album (they played 4 off it at this show) and see them if you haven’t already! 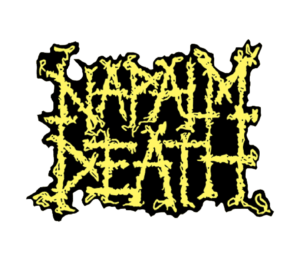 Ever go to a metal show or perhaps even listen to it on a Spotify channel and begin to think that it is all starting to sound the same?   I have attended lots of shows Read More…