Did you have a bad year? This band will give 2022 a happy ending and put a smile on your face.

2022 was the year that concerts were to be a thing again, but it was a tough slug for bands that were anxious to get out there and perform in front of adoring fans.    With the war happening in the Ukraine, oil prices and everything else skyrocketed.   That makes touring extremely difficult for some bands to cope with and along with border issues right up to October of 2022.  Concert tickets were actually fairly reasonable for the most part, along with merch, but the bands didn’t reap a lot of the profits.  That didn’t help Northwest concert goers either, as the spring was really soft for shows but picked-up in the summer only to go somewhat flat in the fall.

Vancouver itself didn’t have much for major shows at all in late November or December but we get Steel Panther for 2 shows on December 29th and 30th  (both sold out or near) at the Commodore Ballroom with tour support from Kelowna BC natives The WIld!.  We are so excited to see this band since their last visit in 2019.   They were set to come in 2020 but with the pandemic, that of course, cancelled. 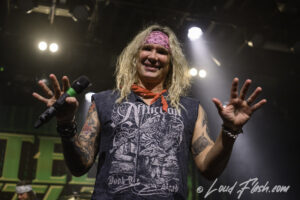 But hey!  Its time to party with these cool cats from L.A. and we see lots of fans in full 80’s costumes with mullet wigs, bandanas and tight, tight leggings!   This is not out of the ordinary for a Panther show as fans love to dress up and play the part here in Vancouver. 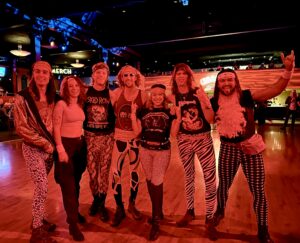 The show starts up with the curtains drawn we hear Van Halen’s “Unchained” blasting on the PA system and the boys appeared to be talking, not quite ready to start yet so the curtains closed and 2 minutes later re-opened again starting with “Goin’ in the Backdoor”.

They have had a MAJOR change in the band lineup too since their last Vancouver performance.   Sadly, longtime flamboyant founding bassist Lexxi Foxx left the band back in 2021 on his own accord.   Maybe a Covid casualty in the way of having some self realization that touring for the last 20+ years got to him?  Hard to tell because you hear so many different reasons why and these guys will joke to the end about it. 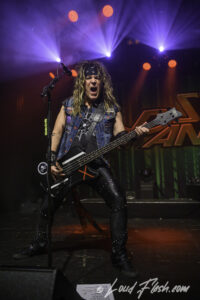 The good news here is that after auditioning bass players for the longest time it seemed, they finally settled with Spyder (Joe Lester) who hails from Seattle Washington.  He has been with the band on several tours filling in for Lexxi, including Europe    Seems like a shoe in.

They hit one of my favorite songs in the discography at song 2 with “Tomorrow Night” off 2011’s Balls Out album. Its such a hilarious song about thinking about the pending party tomorrow and what chaos will ensue.  Thereafter, Stix (drummer) is poking fun at Def Leppard drummer doing a 1 arm thing (as you know Rick Allen has only one arm). 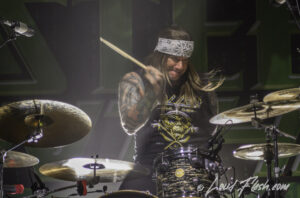 They also get into “Asian Hooker” next, when two Asian girls are invited on stage and dance along with the band.  They are having the time of their lives on stage that’s for sure! 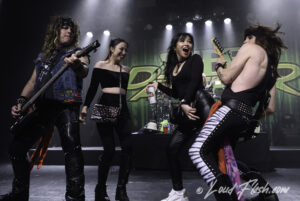 Song 5 we get another classic with “Just like Tiger Woods”, how could they not play that one right?

Song 7, singer Michael Starr gets into his Ozzy Osbourne costume and they do a cover of “Crazy Train”.  He does a great Ozzy impersonation, even forgetting lyrics and walking back to look at the teleprompter. 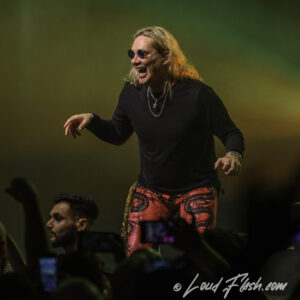 Satchel does his solo thing next, doing riffs from all sorts of metal bands and hitting the drums as he plays.  He needs to be mentioned more when top guitarists articles come up, because he can cut a rug on that Charvel guitar.

They bring an attractive lady onstage for “Weenie Ride” and drummer Stix is playing keyboard at the front of the stage.  Thereafter those shenanigans, it gets even wilder as they invite 20-30 girls onstage and doing “17 Girls in a Row”.  Quite the carnival atmosphere at this point and the crowd offstage loves it. 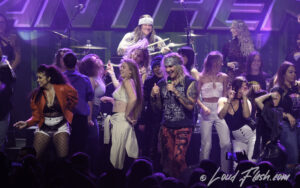 The night climaxes at song 13 with “Gloryhole”.

Was this different show from what we saw in 2019?  Not really, a few different songs this time around, albeit they played 15, but it’s still the core show from 2019.  There is still lots of in-between song joking around as per usual, sometimes a little excessive, but to be expected with these guys.  Would’ve I liked to hear a few of the other songs they didn’t play in the last 3 years?  Certainly would, but, they do another show tomorrow night and maybe they throw in some others?  Wish i was there to see the debauchery!

I am expecting a new album called On the Prowl to appear in 2023. We need some fresh meat to offend everyone with!  Love these guys to death.

Invisible Orange promotions bought in ‘Striker” to the Rickshaw Theatre in Vancouver. This five piece band (from Edmonton AB) and who formed in 2008, played an aggressive set in advance of the release for their Read More…

Ever go to a show and wonder when these guys will headline Arena sized venues? It’s only a matter of time when the big bands like Iron Maiden, Judas Priest, Metallica, Anthrax and Megadeth start Read More…