Have you ever heard a fellow employee say “If I leave they will need two people to replace me”?….

Well that is exactly what has happened here with Trivium at Vancouver’s Commodore Ballroom presented by Live Nation.

Lead singer/Guitarist Matt Heafy had decided to take a leave of absence this past week due to the oncoming birth of twins.   Major props to Matt for his family first decision and leaving this mostly sold-out North American tour (including Vancouver).

The band has a backup plan however, they bring on vocal extraordinaire Howard Jones (formally of Killswtich Engage), now with support act, Light the Torch. Also Internet comedian/musician, Jared Dines,  to fill with Matt’s parts on guitar.   There was a lot of curiosity among hardcore Trivium fans on how well this would work out.  Let me tell you, both these additions exceeded my expectations with replacing Matt!

They start this show with the savage “Betrayer” from their latest opus The Sin and The sentence, a song that really puts them back on the map with some brutal vocals and crunchy guitar chops.  We further get some sick solos mid way on “Betrayer” that really lay to rest quickly if Jared is up to this task.  Howard has such a brutally deep voice too, more death metal territory than Matt can reach, which takes this song to another decibel level.  However his clean vocals really cut through on this track.

Ok we got through that, how about ‘Throes of Perdition’ next, and another up tempo, ultra-heavy one again from Sin and Sentence “Beyond the Oblivion”.    Corey Beaulieu with some crazy solo work on this one, adding vocal fill as per recording.  He doesn’t stray too far from his side of the stage, knowing that he is busy with more vocals for these shows now.   Furthermore, bassist Paolo Gregoletto is providing additional vocal fills more often than we are used to seeing and doing it very well.   I Loved the pounding we hear from the latest new drummer, Alex bent.  He really kicks in the blast beats hard and timely during “A Gunshot from the Head of Trepidation”.   Howard Jones took a break, whilst Paolo Gregoletto and Corey Beaulieu did sole vocal duties during that track as well as three others this night. It was nice to hear that older song back on the setlist this time around, as their late last year visit had it noticeably absent. 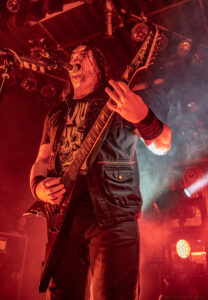 This was no abbreviated set by any means either, ending the set with two more solid ones from the latest with the title track “The Sin and the Sentence” and the hooky laden “The Heart from Your Hate”.    Finally getting to the rapid riffs of the 12th song with “Down from the Sky”, from 2008’s Shogun album.  By this point Jared Dines was all over the stage and feeling very confident, hitting all the notes to perfection.  Heck; the fans even started a “Jared Dines, Jared Dines, Jared Dines” chant midshow.  A testament to his popularity with his hilarious Youtube videos, but we also see he is no slouch either in a live band scenario.

Now we go to extra time (a la encore).   Avatar Country’s corpse painted face vocalist Johannes Eckerström enters the stage and proclaims that “Tonight we celebrate…9 months ago, Matt got laid”.   He takes over the mic and adds abit of flair here to “Strife” and another one from the past,  “Pull Harder on the Strings of Your Martyr”.  Every now and then he cruises by the mounted ipad to check on lyrics, but who can blame him since it’s only the third show without Matt.    Howard Jones comes back for vocal duty on a resounding  finale with “In Waves” , where they get the sold-out crowd to crouch down and jump up.   It’s was a convincing, yet very enjoyable ending to a Trivium show we will likely never see again.   IF you can get tickets, go see Trivium! 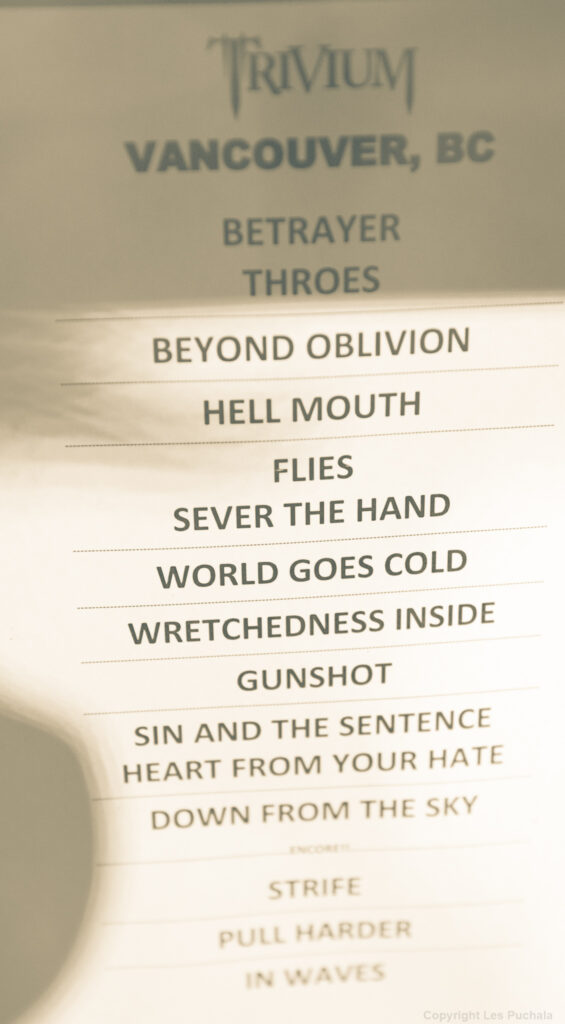 Metal Blade recording artists, Revocation, are back at Vancouver’s Rickshaw Theatre with some high octane technical death metal. Based out of Boston, they have released 7 albums since 2008 and are currently touring with the album Read More…