It seemed like this day would never come, but believe it or not — King Diamond — finally made his way to Vancouver!

The man, the myth, the legend, King Diamond brings his full show to the Queen Elizabeth Theatre this cool crisp evening.  But our hearts are warmed with the thought of finally hearing his high pitched singing along with his nasty satanic imagery   The King has been around for many years (63 actually), and achieved most of his fame mostly the mid 80’s when he broke off with Mercyful Fate and went solo with such classics as 1985’s “Fatal Portrait” and 1987’s “Abigai”.  The last being done in 2007 with “Give me your Soul Please”, however we will be getting a 13th album “The Institute” in 2020 and we can hardly wait. 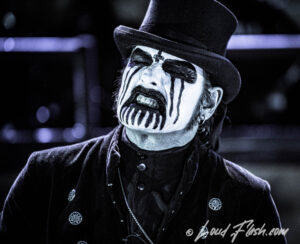 One thing that has shocked me about tonights show, is that it is NOT sold out!  Unbelievable!  Vancouver, where are the West Coast headbangers at?   At press time, only 1500 tickets out of the 2500 available were sold.  That is SHAMEFUL for such an amazing band!

Ok lets get on with the show!…

The lights dim, and the curtains open to reveal a huge haunted mansion like house..  Cut in half like a …….umm like my kids Barbie house.  Such an amazing stage structure and design too!   The door at the centre is glowing and a ghoul pushes a gurney out with King Diamond on it.  He then arises, and they start into ‘The Candle’.  Holding a cross made of bones with his mic is propped on it, along with his famous corpsepaint,, its surreal to see him back in form.  King’s very unique voice is just amazing.  If I could describe it, it would be like a banshee having its balls torn off by a pair of old rusty tin snips.   Crazy high vocals and to this day, he can still do it!  At 63!  Wow! 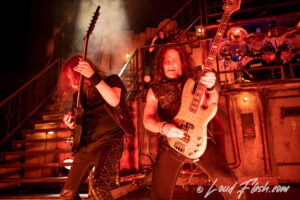 Oh yes, he does have a very competent band too! One of the best shredders in metal, Andy LaRocque is still on guitar, since 1985!  Along with Mike Wead who can also hold his own on solos too.  The backend is rounded out by Pontus Egberg on bass Matt Thompson on drums and background female singer – Livia Zita (wife to the King).   Although unquestionably King is the limelight character here, the band is also not left in the shadows, which is cool.

If you love your shows with lots of drama and characters walking about the stage, this is a MUST SEE.   Love the actors that come on stage and provide the side entertainment along with tonnes of props.  Heck, we even get Grandma wheeled out too!  The entertainment value is rated high on this show, it’s a feast for the ears as well as the eyes.  This is a show that is VERY RARE nowadays, we just don’t see this type of entertainment with metal anymore.  Heck, I felt like I was in the 80’s all over again watching this, as the guy next to me lit up a joint and passed it around (no, I didn’t take any, ummm, cough, cough)   Yes, we can whine all we want to about how expensive this show was for tickets, but look what you get in return!  Mindblown. 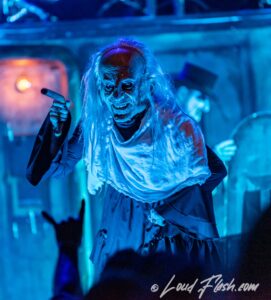 Other big songs he hits (I believe it was 14 or 15, setlist attached in photos), ‘Arrival’, ‘Halloween’, ‘Welcome Home’, ‘The Invisible Guests’ and ‘The Lake’ .

ALSO we are treated to a brand new one, ‘Masquerade of Madness’, it extremely catchy and I can see this one in his set for a long time .  During the song, you see a girl on her bed, wearing some sort of tin helmet over her head, going berserk.  Then King comes up to her room, walks her down the stairs and eventually sticks her in the furnace.   Totally METAL.

Do I really need to gush over King Diamond anymore ? The guy kicked our asses and made up for a lot of lost time = Show of the YEAR 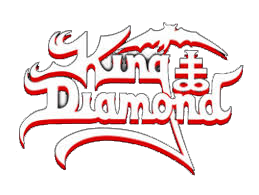 Hailing from Cincinnati Ohio, vocalist Laura Dolan was very captivating with her haunting vocals which they label “Dirty rock’n’roll”.  The band brought in some impressive nostalgic Rock riffs while on tour to promote their latest Read More…

Los Angeles-based glam-metal rockers Lizzy Borden make their FIRST EVER visit to Vancouver! Longtime fans finally get to see Lizzy at the Commodore Ballroom along with his macabre showmanship. I am for one, thrilled to finally see him as Read More…