One thing to note about music and what makes bands succeed (and that’s subjective) or standout is trying to be different than the rest.   This night at the Rickshaw Theatre in Vancouver, we are treated to one of Finland’s finest Swallow the Sun.

What makes them so different? Swallow the Sun incorporate several different styles into their music such as doom metal, death metal, black metal and even atmospheric goth-like tendencies. I think this is what makes them so special is that you could hear these sorts of melodies all in one song.

I first witnessed them back in 2012 at the Rickshaw, when they were backing up one of Germany’s finest bands ever, Accept.  That was abit of an odd pairing for me but it was a show I would never forget because these guys were just so different and unexpected touring mates.   I am thinking perhaps Accept band leader Wolf Hoffman saw something back then that we needed to see?  It was definitely a show I would not forget. 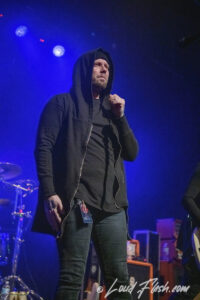 Since 2000, the band has 8 albums to their discography, with the latest “Moonflowers” released very recently in November 2021 that is presently getting rave reviews.   I have been listening to it for the past couple weeks and I definitely agree with the critics and excited to see how well they pull this one off live.

They start off with the guitar arpeggios from the song ‘Moonflowers bloom in Misery’ and the band slowly slumbers out onto the stage and cut in to the backing track.  The band consists of Juha Raivio (guitar), Matti Honkonen (bass), Mikko Kotamäki (vocals), Juuso Raatikainen (drums) and Juho Räihä (guitar).    This is a band with not a lot of flash or jumping around like Van Halen.  They concentrate on getting these songs precise and move to song 2 on the album with the catchy chorus of ‘Enemy’.

Mikko has a tremendous voice.   He does a lot of clean vocals but can instantly move to frightening death metal that sounds very reminiscent Spiros Antoniou’s gutterals of Septic Flesh.  We heard some between song banter from Mikko on some Canadian border difficulties that forced them NOT to bring any Merch to the show as that they could pay thousands in fees.  As well as his mention of how badly Covid is affecting artists, but who can blame him? It’s been a real crappy deal for all of music these past 2 years but we are just happy that the band made it across and perform a 13 song set that included 5 from Moonflowers. 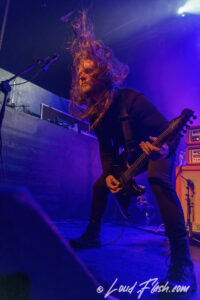 I found it funny this week as one person posted on facebook that he would not attend this show because of the ‘No moshing allowed’ due to Covid restrictions but to me this is not a real “moshable” band with most of this set.  But then again, who am I to judge, as they mosh at rap shows! However, near the end the headbanging got more frantic with the last 2 songs with ‘Descending Winters’ and from their first album, the song ‘Swallow (Horror PT.1)’.   Even Juho (guitarist) got into it doing windmilling style head rotations.  I got this feeling he wanted to get to it the entire show.

All in all it was an outstanding performance and was impressed how well they sounded.  IF you have not heard them or seen them live, I would suggest you pickup their latest album and catch the show on this tour!  You won’t leave disappointed.

Solo Guitar shredder Sammy Boller was at the Rickshaw Theatre in Vancouver on September 7 2022 supporting Monuments Tour. This guy is a fret board tap master!

Symphonic metal veterans Kamelot, makes their triumphant return to a full crowd of loyal fans at Vancouver’s Venue Nightclub This group (which features an international lineup) — is one that I have missed over the years for Read More…

Supporting Code Orange at the Rickshaw Theatre April 9 2022.  Connections here with Slipknot as Corey’s son (Griffin Taylor)  is the singer in this band as well as the drummer is Simon Crahan (son of Read More…