Avatar with support from IMONOLITH and Light the Torch is at the Vogue theatre on a very hot summers day to kick off a somewhat quiet June and July for big metal shows in Vancouver.   They are in town supporting the album that was released 2020 in the middle of the pandemic called “Hunter Gatherer”.

So what happens when a band has a member that needs to exit in the middle of a tour?  Over the years I have seen this happen a few times.   Each had a different way to handle it.  For example, Trivium had Matt Heafy leaving as his wife was expecting, so what they did was have the vocalists on the supporting acts – Howard Jones (Light the Torch) and  Avatar’s Johannes Eckerstrom fill in for the entire tour.   Another was when Obituary bassist Terry Butler had to leave mid tour so the guitarists in that band tuned down, and added some deeper frequencies to add some low-end to the sound.   Another was last fall with Jinjer who’s drummer left mid tour, so Jinjer had quickly got a hold of the drum track recordings and played the set for a few shows like that with no drum kit behind them..  Tonight we see a similar situation with Avatar bassist Henrik Sandelin leaving due to a family reasons.  They had some bass recorded on click tracks, so it’s his bass sound, but he is only here in spirit this night.  Hope all is well Henrik!

Onstage the roadies (who all dress alike, much like Avatar do) setup an extra set of drums at the very front of the stage. The show starts off with the band in a V pattern with Johannes at the centre of it.  I see Guitarists Jonas Jarisby (guitar),Tim Ohrstrom on the right side with John Alfredsson on the scaled down version of his drumkit on the left.   They get into the first song called ‘Colossus’ (full setlist in the photo gallery) from the new album and play in that V position for the entire song which is kind of a unique idea to start a show.

But everything is unique about these Swedes, yes Johannes Is still in his circus like corpse paint (a la Alice Cooper) but the whole band participates in costume which is in leather coveralls on this tour. 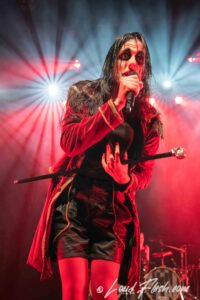 Johannes is just as maniacal looking as ever.  If you recall, the last time he was in Vancouver (2019) he was suffering with a flu and I think that show he just wanted it to end but still put in a exceptional performance.  Tonight he was a lot more insane with more in-between song hilarity from him.  The guy is the Jim Carey of metal with all his facial expressions and dance like movements in Song 3 with ‘Silence’.

Visually the band is really something to witness live.  The synchronized windmill style head banging from the entire band is incredible as we saw in song 4 with ‘Bloody Angel’.  I have no idea what neck issues they will have in later years but I would say they are the best in the business.   I have to also put in a mention that the lightening for this show is supreme, which really made things better in the Vogue Theatre that almost continually has abysmal lighting for most shows.

We get that whistling song ‘A Secret Door’ at song 8 when the chaos slows down abit.  No actual whistling as that’s on a track but that song really holds up on its own live.  As well they do ‘Puppet Show’ (song 12), with Johannes blowing a solo on the Trombone.

But yes, I really think that guitarists Jonas and Tim really need some recognition here as some of the best shredders you will see live.  Their guitar work this night was superb.  Especially with Tim’s ripping solo in song 13 ‘Tsar Bomba’, DAMN! 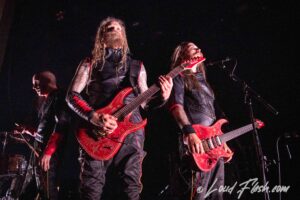 After ‘Statue of the King’, the band freezes up, yes, they freeze in place with exception of guitar player Jonas who then puts on a gold jacket, then the band unfreezes and they get into song 14 with ‘Avatar Country’.

Johannes teases the audience abit at the end of the show and we get some classic Avatar with ‘Freakshow’ and ending the 18 song set with ‘Hail the Apocalypse’.  My only wish on the set list would’ve been ‘Get in Line’, but of course room has to been made for the new stuff right?

Its too bad Henrik had to leave the tour, and he is missed, but they did really well without him too.  They have been to Vancouver 4 times in their history, and I have seen them 3 of the 4 times. Not one show has disappointed!  They are INCREDIBLE live.  A definite must see band regardless of any genre of music you might be into

LA-based American metal core artists Light the Torch lit up the Commodore Ballroom with some fresh new metal in support their latest album “Revival”. In 2017 having going through some complications the band formally known as “The Devil Read More…

There was a lot of grey hair in the audience tonight.  When is it time to quit listening to metal? Never. Our parents thought it was a phase, and seeing all the old guards of Read More…