Amon Amarth have released their 12th full length album August 5 2022 called “The Great Heathen Army” (Metal Blade).  Does it live up to its highly successful predessor “The Berserker” (2019)?

Berserker really propelled this band to the next level, touring around in larger venues along with major acts supporting them (At the Gates, Arch Enemy for example supporting them.).  They have built themselves a pretty deep set of great songs since 1992.

Lets talk about this new studio album and some of the notably cuts from it.

It starts off with ‘Get in the Ring’.  And boy oh boy, does this ever sound like something Bolt Thrower would’ve conceived.   Its right from thier playbook with a slow paced guitar hook at the start that then the rest of the band kicks in, with a  faster riff thereafter which repeats.    Don’t agree?  Give this a listen  1992’s ‘Fifth Crusade‘.   ‘Get in the Ring’ is a great song however but if you are a Bolt Thrower fan you will catch this right away.  Bolt Thrower are no more, so hearing any sort of influence from them makes me happy that the one band that can pull that off is Amon Amarth.

Next is ‘The Great Heathen Army’, immediately the opening guitar chugs sound like something Slipknot would do but the rest of the song has a very catchy chorus.  Johan’s voice is just as gravely and vicious as ever.  Production sound on this as well as the mix is top notch as to be expected from Andy Sneap that seems to do no wrong on anything he produces.

Track 3, Heidrun is a folky type song which makes me want to crack a keg at a wooden table and sing along with a bunch of drunken heathens.  Not my thing, but its well done.

They have kept to a formula that seems to be successful over the last 4-5 albums, nothing too daring or unpredictable.  However, I really liked what they did with song 7 on the album called ‘Saxons and Vikings’.  The song is a view of the Vikings that is sung by Johan and appropriately the Saxon part is sung by non-other than Biff Byford of the band Saxon.  I envision them on opposite sides of the battle field talking back and forth at each other.  Love it, total bonus to hear this song.

The album ends with the 9th song ‘The Serpent’s Trail’, which has a cool chorus and hooky riff in it.

So is this better than “Berserker”?  No, its is not but it’s a solid album none the less and definitely I loved the production side of this one as compared to others in their discography as it definitely pounds well in my car stereo.  Berserker has some memorable guitar work in it that will definitely have me favor it but Heathen’ is a great piece of work too.  Get it. 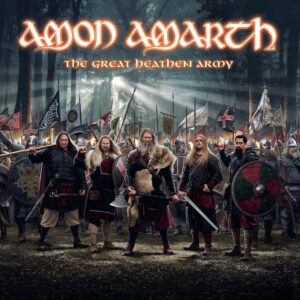 Time moves fast and finally after about 25 years at least, one of Norway’s finest Metal bands finally makes it to Vancouver. The legendary Borknagar is ready to get thunderous at the Rickshaw Theatre as part of Read More…