Nowadays it just seems to me that the art of shredding on a guitar has been lost within the last 30 or so years.   Just not a lot of bands do a lot of killer solos like they did back in the 80’s.   There are some exceptions out there of course, but tonight I am curious to see what John 5 is all about on the guitar.

John 5 presented by the Rickshaw Theatre in Vancouver and a good crowd is ready to see this man put on a show.  But just who is this corpse painted John 5 anyway? 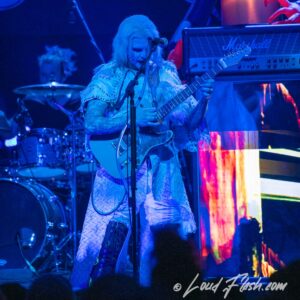 He has played with several bands, most notably David Lee Roth, Marilyn Manson and currently Rob Zombie.  He doesn’t stray at all from his image either, big huge black boots with a white cloak/jacket.  It’s just an amazing fashion statement that makes him look like some sort of DC axe-slinging-rock star superhero juxtaposition.   Believe me, the guy has the chops and he certainly backs it up   Tonight he has brought along bassist Ian Ross and drummer Logan Nix.  But you know, I just don’t recall a lot of crazy finger tap solos in any of these bands he has played with.   Let me assure you, I am about to see a lot of that tonight.

First off is Season of the Witch, a hard rocking song with some searing solos and tap work.  That pretty much sets it off for me, all pretty much effortless for him to watch, all the while, all us guitar players in the crowd just are in awe.   The next song, ‘This is my rifle’ is a cornucopia of finger tapping and sweep picking…….OMG, just ridiculous.  From there it just gets even faster and crazier with ‘Six Hundred and Sixty Six Packers in Hell’. 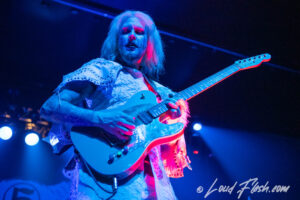 So this isn’t some dude just rattling off on his guitar, but puts up a lot of cool stage visuals as well.  Every now and then some sort of stage creature is roaming the stage.  Hell, I just about got poked with a pitch fork from one of the little demons.  I really loved the stage setup; blow up castles, active video screens which certainly add to the ambiance.  As well as he puts on a few masks to make it interesting, not to mention the 10 or so guitars he plays.   One in particular was a see through body, fluid filled with some sort of green goo……sick! 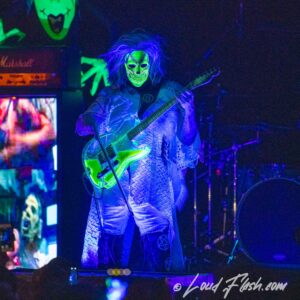 What makes him amazing is that he can play any genre of music.   With ‘Jiffy Jam’ and ‘Hell Haw’ he displays this with some chicken pickin’ country and jazz flavor.  Jeez, he grabs a flippin’ banjo too and rocks the hell out of that too.  Plays a Mandolin as well and is practically laying on his side doing it, which so funny to watch. He is not afraid to play anything at all songwise, including ‘Beat it’ (Michael Jackson), which he doesn’t sing, but makes that guitar do all the talking.  Thereafter he hits a huge medley of pieces of 80’s metal (Rush, Metallica, Megadeth, Pantera, ACDC and more) and makes it look quite elementary.  At the end he has a little robot strutting around the stage while he plays his ‘I am John 5’ song through a talk box.  Mind-blown. 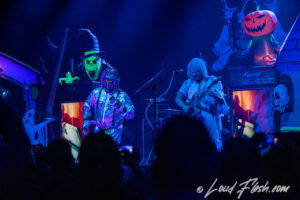 So I learned alot about John 5 tonight, the guy has skills that are simply extraordinary.  Highly recommend you see John 5 when he comes to your town, he was certainly entertaining.  We will be seeing him in Vancouver later this year when Rob Zombie makes a visit…..looking forward to that show!

Does winning awards make a huge difference in a Heavy Metal band?  How accurate are they? I mean look at that one year that Jethro Tull won over Metallica back in 1989 for Best Hard Read More…

That Scandinavian freak show known as Avatar and presented by Live Nation parade into Vancouver’s Commodore Ballroom. The band was touring supporting their latest album Avatar Country – and it was only their second visit ever to Vancouver.  The first visit was Read More…

Photos of Kelowna BC hard rockers The Wild! on December 29th 2022.  They were in Vancouver at the Commodore Ballroom supporting Steel Panther